You know it’s summer when….

The firt listed event is still on-going.
The last three mentioned have not yet happened – but will. Very soon.

Wow! It’s go, go, go! Being entertained and entertaining. Which, in normal times is just routine, but My Beloved has been debilitated by some freak twist of her back, which jerked the hip around, which jerked the knee around. The daughter who brought the grandson also has back, hip and IT band problems.

Oh, but despite the physical infirmaties, we all seem to have been having a great time. Daughter and grandson have been helping out with many of the gardening chores, such as planting bedding plants and trimming hedges. Our guests from Atlanta felled trees, trimmed them and cut some up for firewood, thereby allowing us a better view of the bay and the islands. And also fixed a troublesome pond pump and electrical connection with the house. We thought. But now it seems we may have a leak in the liner, for the sum of the water circulating and evaporating is greater than the sum of the water entering through a float valve. Hmm!

But, of course, there is always dining with family and friends. Just a week or so ago, we dined with two other couples at the house of one of them and enjoyed a fine meal, but, more importantly, we enjoyed each other’s company and socialising.

And a couple of days ago, the friends from Atlanta, our daughter and grandson, My Beloved and I took two cars to the Rope Loft restaurant in Chester – three boys in one and three girls in the other –  and spent a lovely evening on the deck. And since I am frequently told by some of my readers that you all enjoy reading about our dining adventures, here’s what happened at the Rope Loft.

Six of us descended on the restaurant just after 5pm on a Friday afternoon when the harbour was filled with boats and the streets laden with cars. However, one of our number jumped out and enquired whether there was a waiting time for a table and quickly returned with the thumbs up. They could accommodate us immediately. 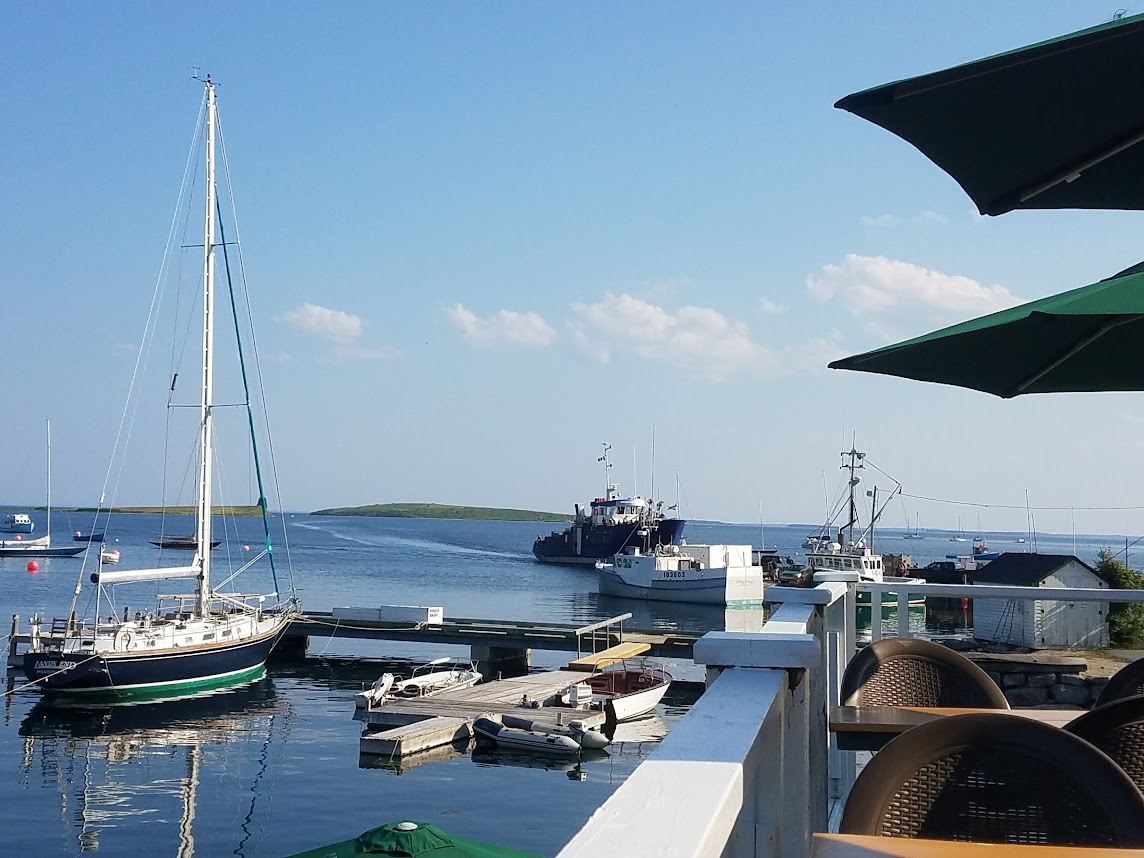 We were seated on the top deck with a perfect view of the harbour and able to watch the Tancook Ferry come in and out. Our server, Heather, was fun all evening and I’m sure one of our number (one of the four from Atlanta and we will call him our host, for he insisted on paying the bill at the end of the evening) gave her a good tip at the end of a lovely 2-hour meal. It was two hours because we enjoyed eating and drinking slowly and Heather never made us feel at all rushed. BTW there were a few tables available, anyway!!

We started with drinks, one spicy Virgin Mary for a grandson and one similar one for his grandfather, since he was one of the drivers of the two cars. As it turned out, our host had recently experienced our famous Keith’s IPA and he had fallen in love with it, so he started with one of those. His lovely wife and our daughter and mother of our grandson both had double vodkas with juice of a lime and lots of ice; a concoction daughter has been using of late.  My Beloved had a Bulwark Cider, which is on tap. We also ordered a litre of the Nova Scotia Jost’s red wine for four of us to share.
Oh…………and subsequently, another half-litre.
And I started on the litre. You can’t let red wine sit too long or the fruit flies will drink it all. That’s my story and I’ll stick with it.

We also ordered three orders of garlic cheese toast, which, when they came, were very quickly devoured as they were so scrumptious. (The pic is of one order.)

As main courses, our host ordered a dozen raw oysters, but three of those somehow fell into my daughter’s plate and another three into mine. To make up for his losses, he he also ordered the Friday special 6-oz tenderloin. While he and we all said the oysters were small, but very tasty, I did not here any particular comment about his tenderloin, so I suppose it passed the test.

Our grandson had an appetiser of smoked salmon pate comprising smoked salmon, cream cheese, capers and shallots all freshly blended on slices of fresh baguette. As a main, he had a burger stuffed with onion, tomato, bacon and Cheddar cheese with fries (he asked for no lettuce – he’s no vegan), which he avariciously inhaled, although grandmother said he had to eat it all or there would be no dessert. Which he did.

His mother had the peel and eat shrimp  – declared by her to be ‘fantastic’; the flavour and blend of the garlicky and spicy sweet roasted red pepper sauce were outstanding.

Our host’s wife had the fish cakes, which she found bland, but after adding Tabasco, she quite enjoyed them. Homemade baked beans came with them but she donated them to her spouse.

My Beloved had the 1-lb bowl of mussels – an eternal and world-wide favourite of hers, having eaten them in New Zealand, Chile, and various countries in Europe –  and, although on the small side, she said they were very good, but the excellent broth, which had a touch of lemon and garlic in white wine, was delicious.
Of course, white wine falls into the eternal and world-wide favourite category, too.
Along with red wine.

My choice for main course was the fried clams and chips. These were not on the menu but Heather told us they were available. I had been seeking a menu with these for a month or more. However, I found the batter was heavy on the clams; but the accompanying creamy garlic dipping sauce made they  very palatable. The chips were crisp and some of the best I have tasted. I am sure they double-fried them.

Our grandson had earned his dessert, so he chose the coconut cream pie. Apparently, after we all had tasted and agreed with his estimation that it was supremely tasty, he was was not left with much of it; so another had to be ordered, so we could all have another taste and leave two-thirds of it for him.

All-in-all, a thoroughly fine summer evening under the evening sun with a delightful setting and atmosphere on the wharf where casual or sailing garb is de rigueur. How enjoyable it is to have food and drink with one’s family and friends. What pleasures we can have in simple meals with those we love!