Are you in the process of downsizing?

Have you already downsized?

If you answered ‘yes’ to either of those questions, then you know what My Beloved and I face. Even though we have no definite plans nor date nor where we will be going, we still should be preparing – if only to save our progeny from having to clear out the house were we both to depart this earth suddenly.

On second thoughts, they would do a much superior cleaning out than I anticipate I will be allowed to achieve. (Do we have a hoarder in the house?)

As of yesterday, I now know what perils and surprises await me. We were looking for some Double AA batteries, which have always been stored in the kitchen in the drawer with a zebra as a handle. However, when we looked in it, we had to rummage through all sorts of  things: wrapping paper, paper bags, scissors, church envelopes, old warranties on kitchen appliances, some of which we haven’t had in this house and dating from when we lived in Winnipeg prior to 1974, sales rebate certificates, dog vaccination certificates and licenses, along with many other items, some of which had deteriorated so badly they collapsed as we took hold of them, and, yes, batteries of all sorts, but no Double AAs. There were Triple AAAs, a D, a C and a couple of those funny circular ones, 2025s.

The drawer was so full that we could not open it fully until we had removed some of the pieces of whatevers. And then, after removing what we thought was everything, we were still unable to remove the drawer to clean it until we had successfully removed a plastic bag, which had been forced over the back of the drawer.

One of the faded and distraught warranties was for a toaster oven, an item which, we seem to remember, we donated to our son, a poor law student – and he’s been a lawyer for something over twenty years now. I think he thought it was a microwave!

Another of the warranties was for a vacuum cleaner purchased from Simpsons-Sears. You Canadian oldies may recall that the Hudson’s Bay Company bought the Simpsons part of the company from Sears and that was in 1978. No, we do not still have the vacuum cleaner. 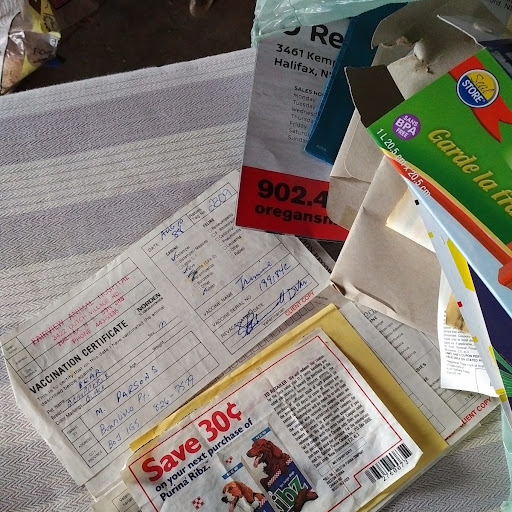 In the photo above, can be seen a dog vaccination certificate from 1988 for Bear. We haven’t had a dog in years – unfortunately, because we love them – because we have been travelling too much and it would be irresponsible to have a dog. Until we move into the downsized apartment, at least. Also in the photo is an “No Expiry Date” for Purina dog food and a pile of some of the contents of the drawer; I wonder if we gave it to a friend who has a dog, whether it could be redeemed.

When I think of all the drawers in the house and then all the boxes and trunks in the basement and the boxes up in our bedroom loft, which came with us in a move from Montreal in 1986, I have to ask myself, how will we ever rid ourselves of these wonderful and prized, but useless, possessions?

There is one bright side to this post: we have one very neat drawer  with a zebra handle in the kitchen.

One thought on “Downsizing”