My Beloved and I are well-known for our proclivity to dining out. But for 14 months of CoVID-19 we have been unable to do so. Until we got our first shots.

While we appreciate that the first shot does not provide total protection, it does provide much better than no immunisation, so when Karen said Dee was leaving for Ontario at the end of the month of April and were we up to a lunch to bid her farewell, My Beloved and I said, since we had the shots two weeks earlier, we were: with apprehension.

After anticipation lasting a couple of weeks and after due discussion as to whether Karen and Peter were going to walk to the restaurant or we would pick them up, Karen said, since you don’t know exactly where the Restaurante A Mano is, pick us up and we will walk back afterwards.

Well, Italian is not my first choice – or even my second or third – but since our guest of honour had requested it, Restaurante A Mano it was.

So, we picked up our friends and, after zipping out of their street, which means accelerating asap left across two lanes when there is a gap in the traffic into a, hopefully, empty lane, and after turning across in front of a cyclist and having an oncoming car trying to make a left turn across our bow in a traffic light intersection and having him honk at me – the cheek of it – we turned into the courtyard wherein is Restaurante A Mano and a zillion other restaurants and there, as Karen had predicted and as she now shouted, ‘There – there – at the end of those cars on the right – oh and there are two on the left!” – I pulled into the blue wheelchair parking space on the right. All safe and sound.

Excitement rose to My Beloved and me, along with greater apprehension than we would have thought necessary. Our minds, however, directed our feelings. So we sat at a very nice window table Karen had reserved. It was a gorgeous day and I could see all through the meal people enjoying themselves in a patio off another restaurant. Karen had originally said on hearing my initial apprehension, maybe we could sit in the patio at Restaurante A Mano. Apparently, they had not yet opened their patio. Maybe just as well, for it might have been too cool outside, the temperature being about 14C. Whatever, we had a lovely table with our lovely best friends. Awaiting the arrival of our guest, Dee.

Now, while being a bit of a linguist, my knowledge of Italian is limited to trying to figure out the Latin root of words. And knowing that left hand in Latin is that very sinister couple of words, sinister manus, I thought Restaurante probably meant Restaurant and A Mano very probably meant ‘by hand’. It does, but I also did my M-W (Merriam-Webster) search along with my friend Google Translate and found out that a mano, as an adjective, which it could be referring to the noun Restaurante, also means carry-on. Well, we were not going flying, so that rules that translation out and leaves the first translation. It’s a restaurant by hand, whatever you think that means.

Thank God Dee arrived. Not that we were not enjoying Karen and Peter’s company, but My Beloved and I were still feeling maybe a trifle uncomfortable and had not taken our masks off since sitting down.

We haven’t seen Dee since she arrived at our front door one day just before Christmas, when she backed away from us on our opening the door, but she had put a lovely bottle of Port and some daughter-made jam on the deck for us to pick up. She kept her distance, knowing we were being very CoVID-19 correct. What a friend!

So, it was good to see her again and her arrival quickly put a stop to any hesitations about taking masks off a tavola (at the table). My Italian is improving.

As the wine and the food arrived – and got consumed – any inhibitions about dining in a restaurant seemed to diminish and, eventually, disappear.

I recall that Karen and Peter shared a pizza. They had no inhibitions, having been to this restaurant a number of times before, even being known by the staff. Dee had some form of an insalata (my Italian broadening again). My Beloved and I shared a garlicky soft bread with a dip, while, simultaneously, she had calamaretti fritti – flash fried calamaretti served with lemon garlic aioli and my additional choice was the Crostini Trio – Goat cheese, honey, fig & pistachios – Gorgonzola, roasted pears, and mascarpone – Ricotta, basil pesto, pomodorini confit.

Pomodorini, you ask? So did I, my Latin being totally useless, since tomatoes of any sort, especially cherry tomatoes, which this word turns out to mean, had not been introduced to Europe until the early 16th century.

Well, it was, Italian or not, all exquisitely delicious.

However, My Beloved and I had not finished: we wanted, nay, needed, a desert. We shared a decadent Torta al Cioccolato e Arachidi – Chocolate cake with not one, but two layers of peanut butter icing, chocolate ganache, candied peanuts and we added a scoop of chocolate Gelato.

It was a wonderful re-introduction to living the way we like it. Thank you Dee, Karen and Peter for not only getting us back into the flow of things delectable, but for introducing us to another great restaurant.

The only issue from the lunch was that we came home and slept for over an hour. And later, I must admit to a little bit of nausea, which disappeared quickly, in the middle of the night.
Food I am not used to and so rich. 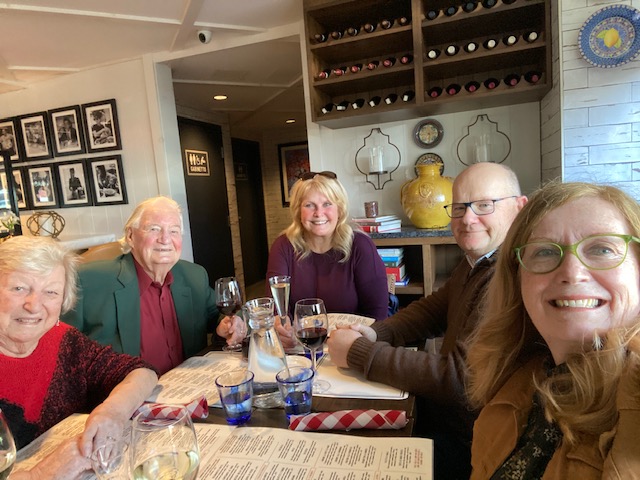 So that was, as I said, our re-introduction to dining-out.

Our wedding anniversary was two days afterwards, on the 9th April, so I mooted to My Beloved that it might be an idea to dine out again. It did not take too much urging. Seems like our apprehension of a few weeks back was nowhere to be found. I had had a hankering for fish and chips for some weeks and this was the time to go for it.

Lefty’s. A family style restaurant (no Italian necessary) just ten minutes away. We checked if we needed a reservation, but, no, they do walk in or take outs.

On arrival, we were welcomed and shown to a booth immediately. Pinot Grigio for My Beloved and Malbec for me. Small glasses only. It did seem strange, however, to be back at one of our customary spots again after so many months.

Two pieces of beer-battered haddock and chips for me;

honey-garlic chicken wings for My Beloved.

In times past, we would have ordered garlic toast as an appetiser. Not nowadays.

So, we enjoyed this dinner and gave thanks for the fact that in Nova Scotia, people have been very good over the pandemic, resulting in relaxed regulations. Friends, Gloria and Ken, from the church came in while we were eating and were shown to an adjacent booth and on answering the question, we replied it was our anniversary dinner except for the lunch two days previously, it had been fourteen months since we last did this.

And then came the time for paying. I gave the server my card, only to have him return it, saying, it has all been taken care of by your friends in the next booth. Oh, how wonderful to have such friends. Bless them for their generosity and love.

So, getting back to dining out has been an adventure we have enjoyed with five great friends. We consider ourselves so lucky to have such friends.

One of the most beautiful qualities of true friendship is to understand and to be understood.
Lucius Annaeus Seneca