Yesterday, My Beloved and I went to our excellent downtown Neptune Theatre to see
– and hear, of course –
Jonas and Barry In The Home

The playwright, Norm Foster, a Canadian – a Maritimer, actually, coming from New Brunswick – has written 59 plays, I believe most, if not all, are comedies, and in any year has at least 150 productions in Canada. I have seen only two or three, but thoroughly enjoyed laughing through them.

Barry is a curmudgeon, as Jonas initially calls him, having come into the seniors’ retirement home on the basis that his daughter, who works there, wanted him closer so that she didn’t want to go to see him at his house, only to find that the place smelled of rotting flesh, he having died two weeks previously. Jonas gradually gets Barry to open up and meet “girls”. Jonas is quite the flirt and has a libido as wide as the horizon. (At one point, he admits to Barry that one evening, he looks at himself and sees “an old man’s penis”, small and flaccid.)

Jonas continues to build Barry’s confidence up throughout the play and Barry eventually turns into a man-about-town. And interesting to us was that Norm Foster himself played Jonas. The essence the Director wanted to leave with us at the end of the production was make yourself happy first and then others will be made happy by your attitude.

If you should ever have the opportunity of seeing this, or any other Norm Foster play, do go and see it.

And after the matinee performance? Dinner, of course. At a restaurant to which we had never been, but just 100 paces from Neptune’s door, East of Grafton, a tavern of sorts.

We, apparently, should have had a reservation, for they were full, the hostess told us, except for two seats at the bar or at one of the high tables, where the stools have no backrest. So, we were in a quandary, trying to decide if we wanted to stay in one of the two uncomfortable places or leave, when a young server came up to the hostess and told her he could find us two seats at a table for four, which, we presumed, the people had reserved and not turned up. Ah, God works in mysterious ways, even on the floor of a pub.

We ordered a bottle of Malbec, one of our favourite wines from Argentina, and perused the menu. On our way to the Neptune performance, we had glanced at the menu on the window, so it did not take long for me to decide on the Salmon Tartare and Fish and Chips. My Beloved pondered over it longer, because we could not find the Open Face Lamb Sandwich on the menu, but which we had seen on the menu on the window. “Oh,” our server told us, “that is only on the lunch menu, however,” she continued, “I will see if the chef will be able to put one together for you.”

Our lovely young woman quickly returned and informed us that the chef said he has one lamb sandwich left and My Beloved can have it. Oh, seems like God continued to work in mysterious ways in the pub!

My Salmon Tartare came with a couple of toasted slices of French bread and was more than delicious: wonderfully sushi-ish, ground up salmon mixed with some form of creamy sauce, possibly with dill involvement. My Beloved had a couple of bites and declared it to be as good as I had. 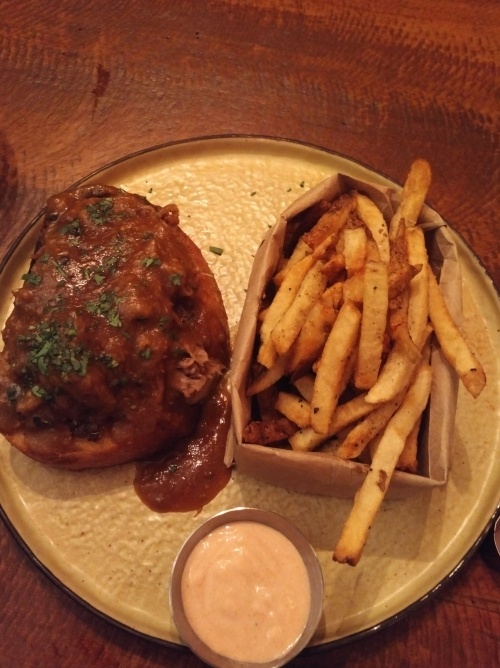 According to My Beloved, the lamb was sitting in a bowl of bread and it did not really live up to its promise – not that I heard it promise anything – but the lamb was a bit dry, she said. Perhaps it had been sitting on a shelf since lunch.

As far as my fish and chips was concerned, I had been informed that the remoulade on the fish was unavailable last night. That didn’t make any difference to me, as I had no idea what a remoulade was, so I didn’t miss it. The haddock fillet was quite large, larger than those we have been able to get fresh recently, and cooked just nicely: that is, still a little moist inside, so it is not at all dry. And the fries, oh, they were excellent. Small, thin and well deep fried. Mmmm! I shouldn’t have had them. I should have ordered a side salad. I’m sure glad I didn’t, though.

And to you, My Friends, I bid you bon appetit with whatever you are about to eat and leave you with the following thought……

A man cannot make him laugh – but that’s no marvel; he drinks no wine.

2 thoughts on “What a Difference a Play Makes!”