Biggest darn bunch of malarkey since the USA claimed to win the war against Canada of 1812. Even though we burnt the White House, yet! The only thing super about it is the amount of build-up and hype created around it. A frenzy of articles, commentaries and advertisements.

But, this is America and I must say that when you have a friend like Terry, you tend to get caught up in the hype and expectations, too. Terry likes the big TV screen our landlord installed a couple of years ago and the fact that he can watch the game in High Definition. So, Terry negotiated himself to watch the Big Game last Sunday, 3rd of February. Oh, yes, it was between the winner of the American Football Conference, Baltimore Ravens, and the winner of the National Football Conference, San Francisco 49ers, to decide which team was the champion of the National Football League. It was played in New Orleans and what more could be added to the hype than that great and exciting city?

But, Terry’s bargaining chip to watch the game was (and he volunteered this) to provide all of the snacks and main meal and wine. Well, on getting home around 12.30pm from church yesterday, there was Terry standing in his PJs up on his second-storey balcony with a glass of what looked like Champagne in his hand.

“Are you hungry?”, he asked. “ Not exactly,” My Beloved responded (she, who had already had a good portion of Mexican Bread Pudding in the Church Hall after the service). “Well, would you like some snacks?” “Sure,” we both replied. (I must also admit, or suffer spousal abuse, I had also had a goodly portion of that gooey Mexican thing.)

A few minutes later, Terry, still in his PJs, duly walked through our door (he didn’t break it, it was open) and deposited a container of wantons he had just
made. 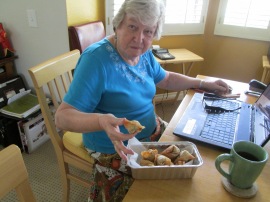 Yes, he had just made them, stuffed with mushrooms, water chestnuts, garlic, ginger, bamboo shoots and soy, and deep fried to a delicate shade of tasty. Very tasty! But it was not yet one o’clock and the game was not to start until half past three, so My Beloved started munching on them while doing financials for the Adult Literacy Group of which she is Treasurer back in Nova Scotia and which was to have a Skype meeting with us Tuesday morning (allowing for the four hour time difference). And so many wantons did he bring. Must have been, including the second batch he brought down, a couple of dozen. Well, that was the end of the financials. I am terribly ashamed, or is it proud, to say that, while we watched Mickelson stroke his way to glory in Phoenix Waste Management PGA Tour, we scoffed the lot. 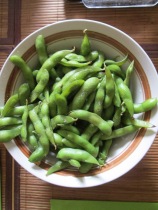 At about the end of the golf we switched to the pre-game channel and Terry arrived with a huge bowl of Edamame pods on which we snacked all afternoon (and I finished up along with my cereal and raspberries for breakfast next morning – peculiar combination, but not all mixed in together), the main course of chicken thighs marinated and then cooked in a most delicious sauce of soy sauce, rice wine vinegar, sliced garlic, sliced ginger, chopped green onions, s 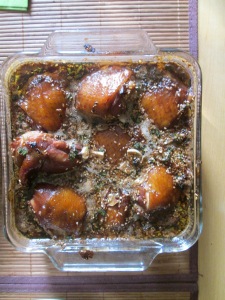 esame oil and toasted sesame seeds. Served with rice, which Terry also provided, this was outstanding or, as today’s jargon goes, awesome.

My Beloved and I swilled it all down with, initially, some imported English Strongbow apple cider, then she joined Terry with a couple of bottles of white wine he had also brought. After my 12-oz bottle of cider, I stuck to my true and tested home-made Merlot.

Terry is absolutely sure that had any two of the four ‘wrong’ decisions the referees, or zebras, ‘incorrectly’ gave not been awarded, our team would have won.

Who cares? We didn’t. And don’t. We had a great time with outstanding food, drink and company. And My Beloved and I did not have to do a single thing except sit back, eat, drink and enjoy Beyoncé during the half-time entertainment.

My Beloved did aquasizes with the ladies’ group and afterwards swam some lengths while I swam 80 lengths (one kilometre) Monday morning to try to get some of the added weight off. We care about that.

One thought on “Super Bowl XLVII”